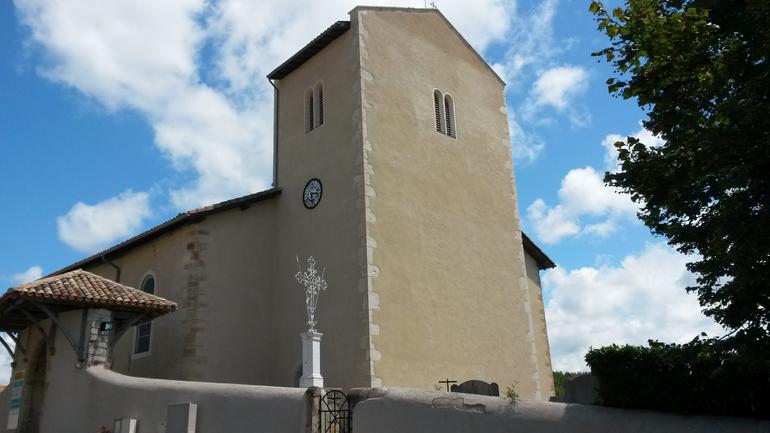 BRIEF PRESENTATION OF THE BUILDING

The church of Saint Etienne d’Orthe is situated in the center of the village, in the local churchyard. The building, normally positioned, is made of a porch-church tower in the West opening on a nave of two bays with two side aisles.

The nave opens onto a choir sheltered by a polygonal chevet of the XVth and XVIth centuries. The plan of the chevet is normally positioned but with an axle slightly bent toward the North. A porch-church tower rises in the West and leads up to a nave whose bays are flanked by collaterals. The nave opens on to a choir in the polygonal apse of the chevet. A sacristy occupies the South-east inner angle formed by the wall of the chevet and the collateral. The sides of the chevet date back to the XVth or beginning of the XVIth century. They are supported by angular buttresses. In each side a big opening has been walled up since the installation of an altarpiece. The southern side has a smaller gothic opening. The collateral walls bearing gutters are set with semi-circular windows dating back to the end of the XIXth century. The wall of the northern collateral has marks of masonry alterations. In 1739-40 the collaterals were created from lateral chapels. They are lit up by semi-circular windows.

The porch-church tower dates back to the XVIIth or XVIIIth century. It replaced a simple church tower and it was built against the original front of the church which has kept its dripstone of the XVth or beginning of the XVIth century.